This BYOB Party (Part 1 and Part 2) had no mention of the Mahabharata. Instead there was a great deal of sci-fi. 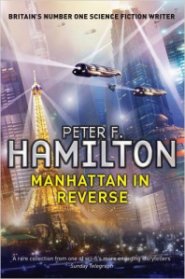 Akshay is an avid sci-fi reader. When he was done with his share of Clarks and Asimovs, he came across Hamilton. The book he talked about was Manhattan in Reverse by Peter F. Hamilton, a book of nine stories. For sci-fi geeks Hamilton’s work provides all the delightful details of time travel, memory manipulation, planetary inequality, inter-galactic wars, and rejuvenation technology.

“When it comes to Hamilton’s series,  as characters don’t die,  there is scope for continuity and evolution. “

In the sci-fi mode, Jaya advised us to watch a short movie available on Youtube- Man from Earth. The conversation moved on to how the social context would change if human beings did not die at all. While on one hand, there would be more Mondays, on the other, there would be less inequality as only those who had the means to live forever would be around anyway. The predominant theme of sci-fi was debated upon- is it human expansion or space operas? A science fiction writer who was recommended was Cyril Kornbluth.

Piya Bose has read her share of sci-fi as well. What she’s now looking for is a sci-fi heavier on emotional quotient. She found this in Never Let Me Go by Booker Prize winning author Kazuo Ishiguro. Three children Kathy, Ruth and Tommy study at Hallsham in an imaginary set-up in the 1990s. Although the narration is straight forward, there is an eeriness and strangeness in the novel that turns it into a mystery.  Ishiguro speaks about how science without ethics is detrimental to society.

“The vagueness of the writer is a style shared by Murakami too,” Piya said. Everyone agreed unanimously that there were two kinds of readers and you would know who would prefer an Ishiguro and a Murakami as opposed to those who wouldn’t.

The Extraterrestrial and Time @ BYOB Party in September 2016 (Part 3)

So what if he shows some cattitude?
Cato the Reader is not vain or rude.

He paws and claws through the content stampede
And finds you stuff that’s Worth a Read!