SBR: I picked up this book in anticipation of our Italy trip. Apparently, among all the book recommendations Abhaya could find for an introduction to Italy’s history, this was a rare one written by an Italian (and available in English translation). Hence I picked it up over the others. History of Italian People by Giuliano Procacci is pretty good, written without excessive national fervor or an extreme aversion to it. But unless you have some familiarity with European or Italian history, I would not recommend it as a first book. Because it seems to address a familiar audience with a good analysis. Unfamiliar ones will have to turn to Wikipedia too often. It also starts only from AD 1000. So ancient history including the Romans and their predecessors is missing.
To read or not to read: Not as a first read on the topic. But a good addition to your reading list for analysis and perspective.

In the first session of the BYOB Party, we had talked about myth and its role in Indian writing, not just in the past but more so now when there is so much room for retelling and reinterpretation.

Post myth, the world turns into a very pragmatic place.

Manish  Mittal, who works in the finance sector, had read a very different kind of book. All fairy tales were fractured at the

mention of the book that he had picked up when he was in Berlin. The Art of Thinking Clearly is a massively popular book in a practical country like ours. I had tried reading it but it was a book that saddened me as synchronicity was redefined as delusion. It worked for Manish. “Many of us hold on to irrational decisions for the simple reason that we made those decisions. It’s best to stop before it is too late.”

Being pragmatic is a good thing but sometimes ignorance is bliss. “One good advice in this book is to stop reading the paper,” Abhaya said. “Or stop watching Goswami,” someone added ironically, referring to the angry iconic newreader on TV Channel Times Now.

Shraddha U, a layout engineer with KarMic, talked about Good Omens– there’s a whiff of the weird and the humourous again when Terry Pratchett teams up with guess who? Neil Gaiman. It’s a humorous twist of the Apocalypse. Looks like contemporary writing is about fracturing the norm and literature is seen as a threat by some, mainly because of the subversive trait that reversing plot is.

Sudharsan Narayanan, who works as Partnerships Head at Vantage Circle, has read the entire Discworld series, “Pratchett writes science fiction in ways that no one else does.” He had got a very different kind of book called Napolean’s Buttons: How Seventeen Molecules Changed History— a book for all lovers of interesting trivia. Take the case of tin. It is said that the tin buttons that fell off of coats during the Russian winter may have just cost Napolean the war. Not to forget the spice economy that changed the course of history. “These are the kinds of books that I love,” said Sudharsan, “Like Bryson’s books- have you read Home and A Short History of Nearly Everything?”

Shruti Garodia, a Content Writer, plunged into author Jerry Pinto’s world.  Em and the Big Hoom is a book that has received much appreciation and is an autobiographical story of building a life when your mother is mentally ill.  Shruti has attended Pinto’s workshops and is a fan of his engaging writing style. “The amazing thing about the book is that it takes a dark subject and fills it with triumph. The book could be very depressing, with its mention of medicine and disease, but you don’t get bogged down by it all.”

Shalini Nahata is the founder of Baltendu Educations and also does reading parties for children. She recommended a book

edited by Sudha Murthy called Something Happened on the Way to Heaven. “Many people shared their stories for a contest run by Penguin,” said Shalini, “Sudha Murthy handpicked the stories from thousands of entries. You should read this book as all the stories are about loving life, very uplifting.”

The highlight of the party was when Shalini’s son, Arhaan, read out his favorite book and as it is with children, when they say favorite, they mean it. Arhaan knows Ricky Ricotta’s Giant Robot by Dav Pilkey and he knows it verbatim. 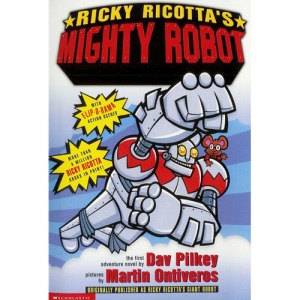 So what if he shows some cattitude?
Cato the Reader is not vain or rude.

He paws and claws through the content stampede
And finds you stuff that’s Worth a Read!